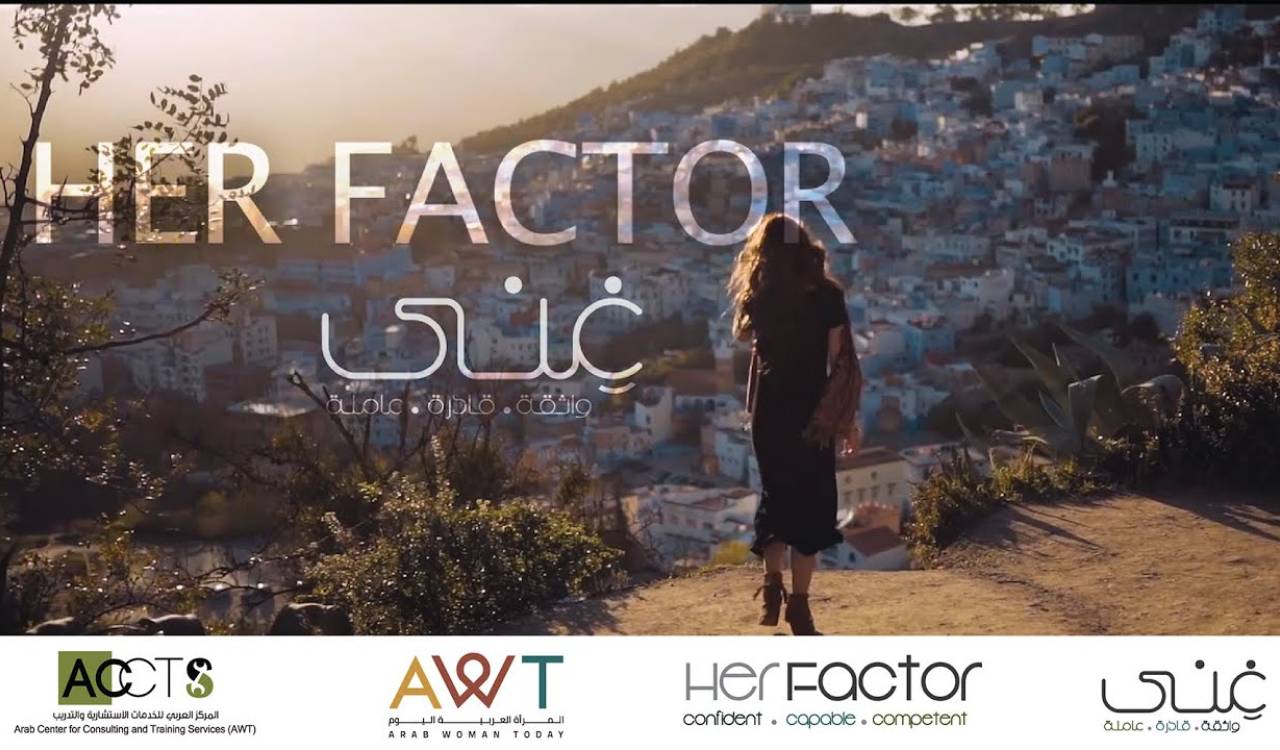 The Ghina campaign sheds light on the reality of women in the field of work and the challenges they face in joining the labor market in Jordan and the Arab world.

To raise awareness about the importance of women's participation in the labor market and their access to equal human rights opportunities with men, the Arab Woman Today Department at the Arab Center for Consulting and Training Services "ACCTS" launched a campaign entitled "Ghina" under the slogan "Confident, Capable, Competent."

The idea for this campaign stemmed from the winning documentary "Her Factor," which won the first prize in the Religious Freedom and Business Film Competition for 2020. Ruba Rihani, Director of the Arab Women Today Department at ACCTS produced the short film and Filmmaker Randy Abbassi directed it, and addressed the issue of women's empowerment in the Middle East with a particular focus on the challenges faced by Jordanian women in the work field.

"There is a great need, and responsibility to enhance the economic empowerment of women in Jordan and the Arab world because it has a great impact on advancing the economic development and enhancing the productive role of women in increasing the total income of the country and her family. The Corona pandemic was catastrophic for many women in Jordan, which weakened efforts to increase women's participation in the Jordanian labor market, especially in the Arab world," said Ruba Rihani.

You can watch the movie via the following link.

Hence, ACCTS came up with the idea of ​​the "Ghina" campaign, which supports women's role in activating the laws that protect them from marginalization and living in poverty. ACCTS looked at the background of this campaign with the lens of some influential personalities representing various sectors of society, whom we interviewed during the filming. We noticed that wherever we went around in Jordan, there is a strong correlation between gender inequality and general poverty. It highlighted the importance of home upbringing in promoting equality between sons and daughters and a decent relationship between husband and wife because it reflects the relationship between any male with a female, such as a student and his teacher, the manager and his employee or vice versa, which makes equality and economic empowerment an integral part of everyday life.

The Ghina campaign shed light on women's status quo in the field of work and the challenges women face in joining the labor market. It aimed to raise awareness on the importance of women's role in the labor market and its positive impact, whether women, those around them, or the growth and progress of society. The campaign centered around three main axes: legal, community and personal.

The legal aspect enhanced women's self-confidence, sought to enrich them, and raised their awareness of their rights and duties according to the law's provisions. Moreover, this was through researching the laws that support women's work and guarantee their right to engage in the labor market without discrimination or violation of their legal rights, in addition to the enforcement mechanisms that hinder their activation. Here, we referred to the various employment practices and the absence of support services that reduce women's employment opportunities.

As for the societal axis, it motivated women to initiate change from themselves and addressed the prevailing social practices, norms, and those stemming from customs and traditions that may hinder women and their work, not to mention the unfair stereotypes of their role that limit their capabilities and marginalize their role in the labor market. While the personal axis encouraged and urged women to pursue education and develop skills, to keep pace with development, and seek success and progress in any field that her passion leads to, and above all to be an active and productive citizen in society.

The campaign supported its goals through dialogue sessions on social media and the Zoom application that was available to the public and addressed the three themes, as mentioned earlier, transparently. A group of community figures, who are active in their fields and effectively contributing to the Jordanian and Arab society, lead the sessions. The legal dialogue session was held on August 6 and the dialogue moderated by His Excellency Kais Zayadin, who hosted Her Excellency Asma Khader and Attorney lawyer Fatima Al Dabbas, Arab Human Rights Organization. They discussed labor laws and women's rights in Jordan and some Arab countries.

On August 8, a community dialogue session was held, aiming to confirm that change begins with us, in our community and our homes. It included Dr. Salma Al-Nims – Secretary-General of the Jordanian National Commission for Women's Affairs, Mayada Abu Jaber - founder and CEO of World of Letters and founding CEO of Jo Womenomics, as well as Sarah Aziz - founder and CEO of the Safe Foundation in Cairo.

The dialogue session covering the personal axis was held on August 10 and hosted Rania Kudsi – the professional counselor, human resources advisor and certified trainer, Karim Shaaban, IOM - Program Director - Levant Region, at the Center for International Private Enterprise (CIPE). The dialogue sessions allowed the audience to ask their questions, and on August 15, Rania Kudsi offered free practical training through the Zoom app; to help women build their careers and enable them to present themselves in the job market. Registration was open on the Arab Woman Today's social media pages.

We believe that the Ghina campaign succeeded in achieving its desired goals, hoping that it will receive institutional, societal, and Arab support. It will raise the awareness of Jordanian and Arab women, contribute to their empowerment, and activate their role in advancing the local and Arab economies, thus enriching our societies in Jordan and the Arab world.

For more information, you can contact "Arab Woman Today": 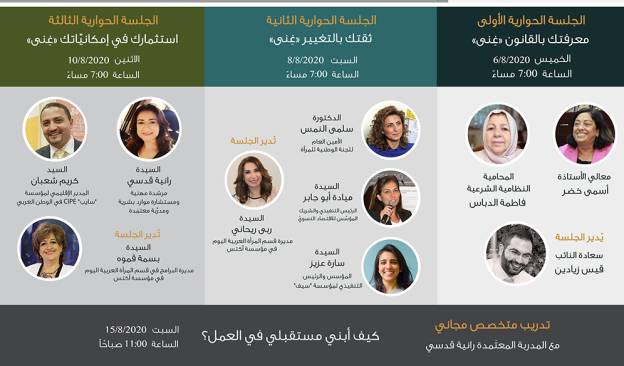 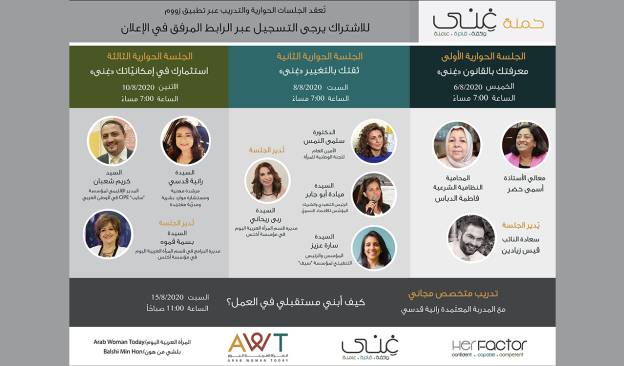 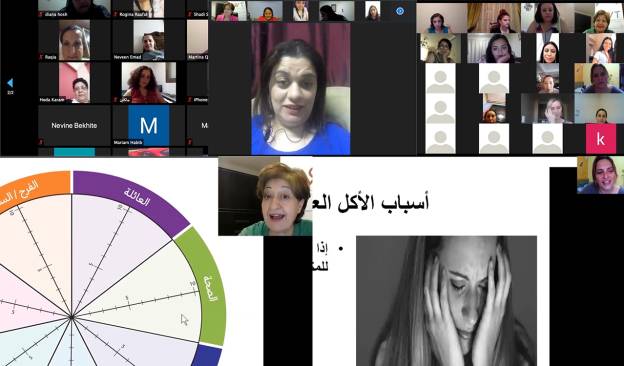